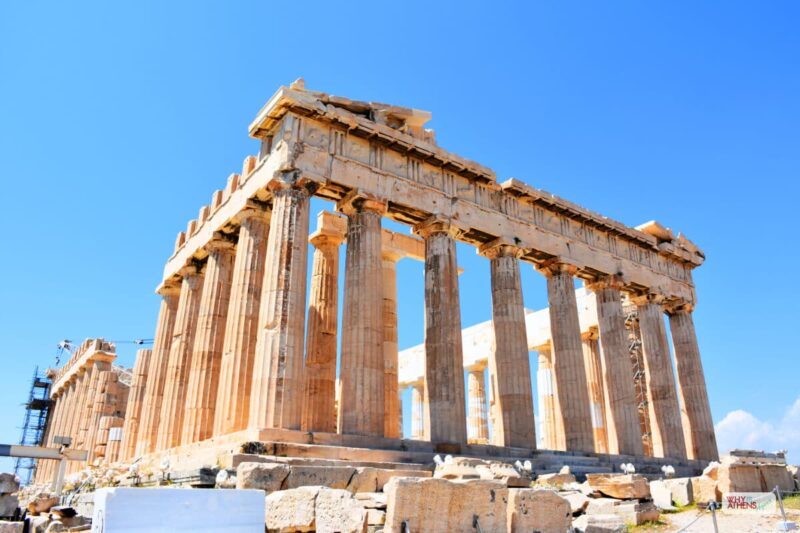 Start and rev up through  the scenic Athenian Riviera towards the first stop of the day. The impressive Temple of Poseidon in Cape Sounio. A magnificent seaside route full of amazing scenery and twisty roads.

The temple of Poseidon, the ancient Greek god of the sea, dominates the southernmost tip of Attica, where the horizon meets the Aegean Sea. Perched on the craggy rocks of cape Sounio, the temple is enveloped in myth and historic facts dated from antiquity until the present times

It is also believed that King Aegeus was waiting for his son Theseus to return from the expedition in Crete. He was there to kill the mighty Minotaur, a creature with the head of a bull and the body of a man. He saw the black sails on the ship and mistakenly thought Theseus had been killed by the beast. In fact, young Theseus was victorious but had forgotten to replace the black sails with white ones. And this ultimately led to his father’s death. A story that  named the sea Aegean after his name.

Next stop  will be another famous historic location  the Marathon Tomb. At the plain of Marathon, near the location of the historical battle between the Athenians and the Persians, is the Tomb. The place where the cremated remains of the 192 Athenian soldiers who lost their lives during the Battle of Marathon. Apart from the ashes they also found traces from the funerary dinner that their fellow soldiers organized in their honor. The Tomb of Marathon is the starting point for the annual Classical Marathon race.

After a short lunch, you will get on your  BMW Motorcycle for the final part of the moto tour towards Acropolis of Athens. Subsequently, you will visit the historical Panathenaic Stadium where the first Olympic Games in 1896 took place and finally stop at the world-famous Acropolis. The Acropolis of Athens, an ancient citadel, located on a rocky outcrop above the city of Athens. It contains the remains of several ancient buildings of great architectural and historic significance, the most famous being the Parthenon, the Propylaia, the Erechtheion and the Temple of Athena Nike. In conclusion, there will be time for a provisional visit before heading back to our headquarters. A wonderful Motorcycle Tour of Athenian Temples full of scenic routes and monuments of great importance.